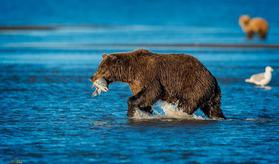 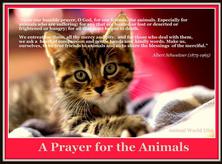 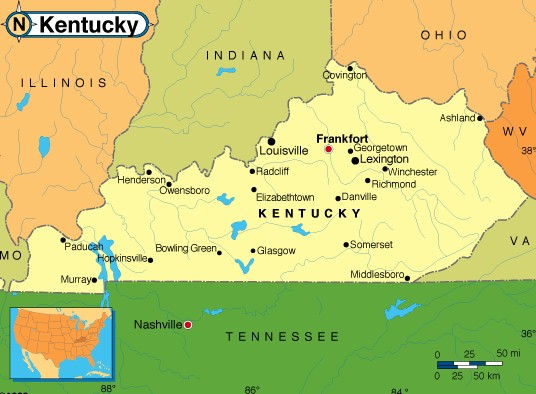 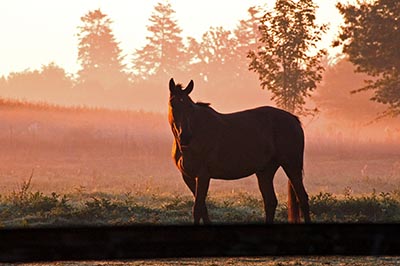 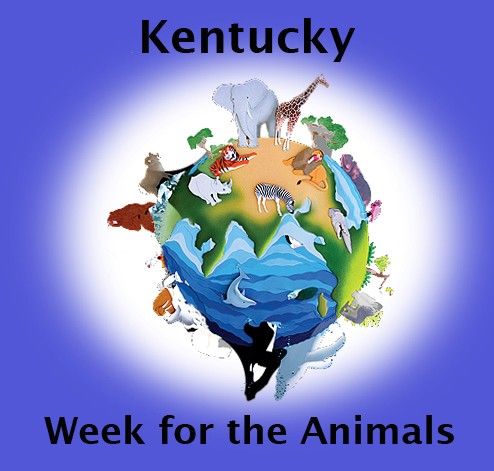 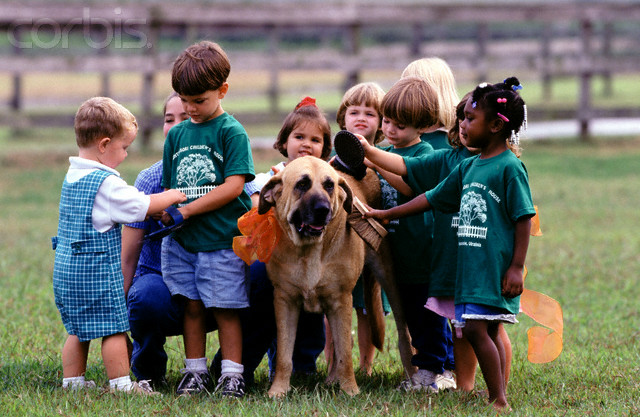 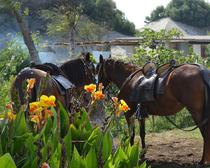 Listen to Kentucky- born The Judds sing "Love Can Build A Bridge." 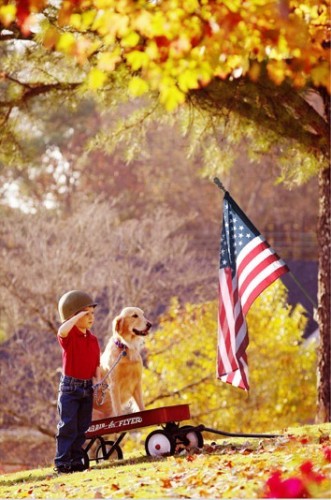 Click on the peacock to listen to Neil Diamond sing "Kentucky Woman."
"Be the person your dog thinks you are. "
~ George Clooney    May 6, 1961
born in Lexington, Kentucky
Pictured with Einstein, his rescue dog)
“The only creatures that are evolved enough to convey pure love are dogs and infants.”
~Johnny Depp, born in Owensboro, Kentucky

Click here on dog to listen to
"Take Me Home" by Phil Collins.

Kentucky Week for the Animals
is for everyone!
When I bestride him, I soar, I am a hawk: he trots the air; the earth sings when he touches it; the basest horn of his hoof is more musical than the pipe of Hermes.
~William Shakespeare, Henry V
Click lamb to listen to sweet
Kentucky-born Loretta Lynn.
Click fish to hear
popular Kentucky songs. 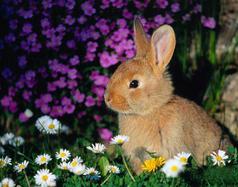 Click KY bird 'Painted Bunting' to hear Elvis sing  "Kentucky Rain."
“Do not follow where the path may lead. Go instead where there is no path and leave a trail.”
~Ralph Waldo Emerson 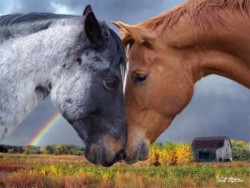 Click horses to hear
"The Way You Do the Things You Do."   by UB40.
Click bunny to hear
The Everly Brothers.
Don  Everly was born Muhlenberg County, Kentucky, in 1937, 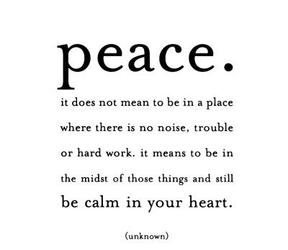 Click on the horse to listen to "Wildfire,"
by Michael Martin Murphey.
Famous Kentuckians!
http://www.kentuckytourism.com/
explore/kyfacts/
famous_kentuckians.aspx
“And the world cannot be discovered by a journey of miles, no matter how long, but only by a spiritual journey, a journey of one inch, very arduous and humbling and joyful, by which we arrive at the ground at our own feet, and learn to be at home.”
― Wendell Berry,  The Unforeseen Wilderness: Kentucky's Red River Gorge
Poet, Author, Environmentalist, Visionary
Born: August 5, 1934 (age 81), Henry County, Kentucky
Influenced by: William Shakespeare, Henry David Thoreau 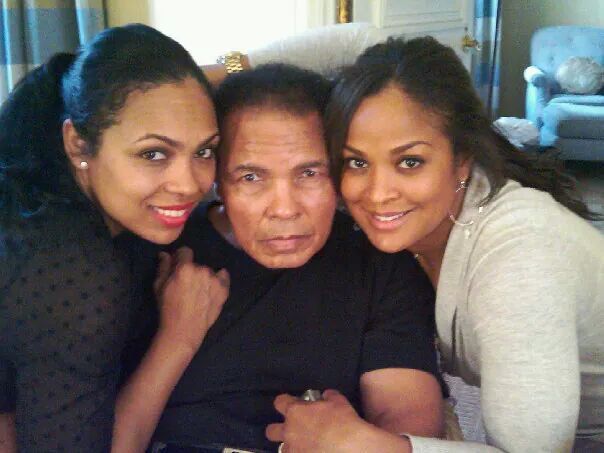 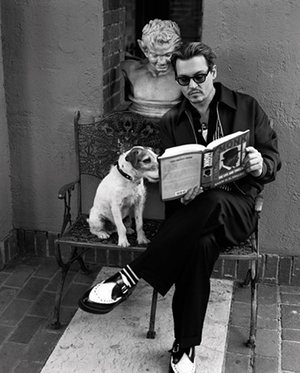 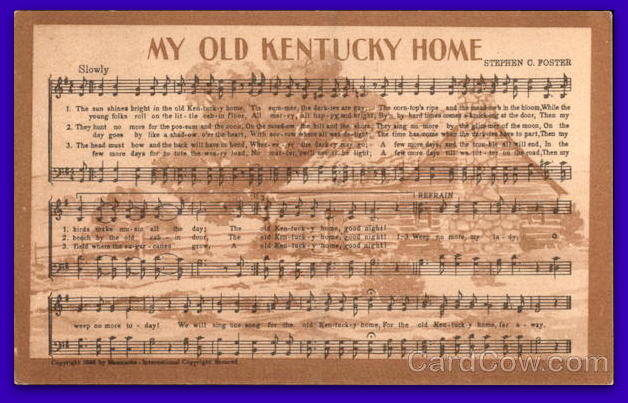 What USA President was born in a Kentucky log cabin ...Loved Animals... disliked Hunting?  President Lincoln.
Abraham Lincoln founded the Dept of Agriculture in 1862. Calling it the "People's Department."
“A dog is the only thing on earth that loves you more than he loves himself.”
― Josh Billings
Thomas Merton* (January 1, 1915-1968) - Essayist on spiritual and social issues. He wrote more than 70 books. He was a Trappist monk of the Abbey of Gethsemani, Kentucky.
He was a poet, social activist, and student of comparative religion. In 1949, he was ordained to the priesthood and given the name Father Louis. 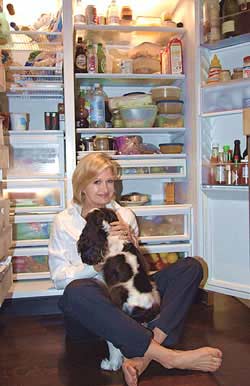 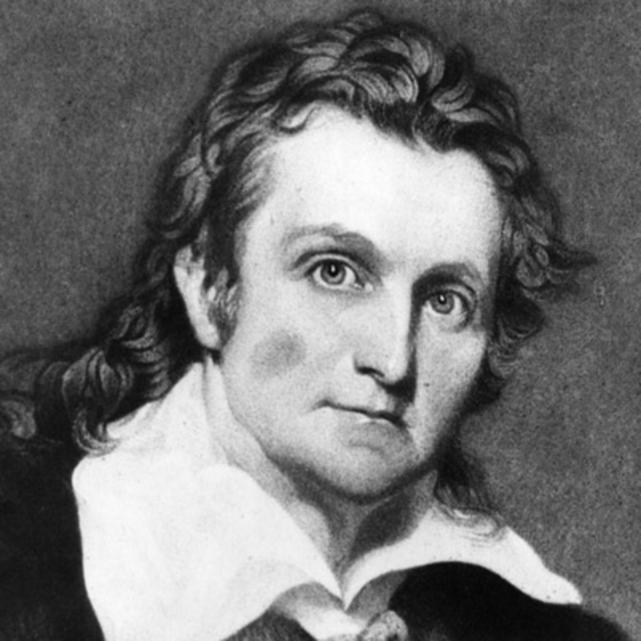 John James Audubon
(born Jean Rabin)
(April 26, 1785 – January 27, 1851) was an American ornithologist, naturalist, and painter. He was notable for his extensive studies documenting all types of American birds and for his detailed illustrations that depicted the birds in their natural habitats
In 1808,  Audubon moved to Kentucky, which was rapidly being settled. Six months later, he married Lucy Bakewell.
Though their finances were tenuous, the Audubons started a family. They had two sons: Victor Gifford (1809–1860) and John Woodhouse Audubon (1812–1862); and two daughters who died while young: Lucy at two years (1815–1817) and Rose at nine months (1819–1820).[29] Both sons would eventually help publish their father's works.
John W. Audubon became a naturalist, writer, and painter in his own right, receiving his own obituary in an 1862 yearbook. 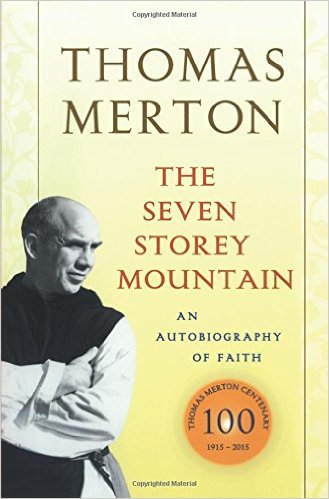 George Graham Vest (1830-1904)
Born in Frankfort, Kentucky, he was known for his skills in oration and debate.and became one of the leading orators and debaters of his time. This delightful speech is from an earlier period in his life when he practiced law in a small Missouri town. It was given in court while representing a man who sued another for the killing of his dog. During the trial, Vest ignored the testimony, and when his turn came to present a summation to the jury, he made the following speech and won the case. It was called "Eulogy of the Dog."
"Gentlemen of the Jury: The best friend a man has in the world may turn against him and become his enemy. His son or daughter that he has reared with loving care may prove ungrateful. Those who are nearest and dearest to us, those whom we trust with our happiness and our good name may become traitors to their faith. The money that a man has, he may lose. It flies away from him, perhaps when he needs it most. A man's reputation may be sacrificed in a moment of ill-considered action. The people who are prone to fall on their knees to do us honor when success is with us, may be the first to throw the stone of malice when failure settles its cloud upon our heads.
The one absolutely unselfish friend that man can have in this selfish world, the one that never deserts him, the one that never proves ungrateful or treacherous is his dog. A man's dog stands by him in prosperity and in poverty, in health and in sickness. He will sleep on the cold ground, where the wintry winds blow and the snow drives fiercely, if only he may be near his master's side. He will kiss the hand that has no food to offer. He will lick the wounds and sores that come in encounters with the roughness of the world. He guards the sleep of his pauper master as if he were a prince. When all other friends desert, he remains. When riches take wings, and reputation falls to pieces, he is as constant in his love as the sun in its journey through the heavens.
If fortune drives the master forth, an outcast in the world, friendless and homeless, the faithful dog asks no higher privilege than that of accompanying him, to guard him against danger, to fight against his enemies. And when the last scene of all comes, and death takes his master in its embrace and his body is laid away in the cold ground, no matter if all other friends pursue their way, there by the graveside will the noble dog be found, his head between his paws, his eyes sad, but open in alert watchfulness, faithful and true even in death."
George Graham Vest - c. 1855
(born in Frankfort, KY) 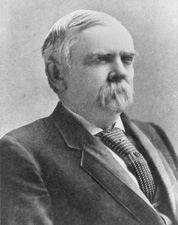 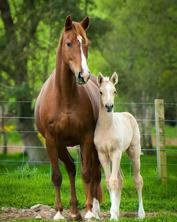 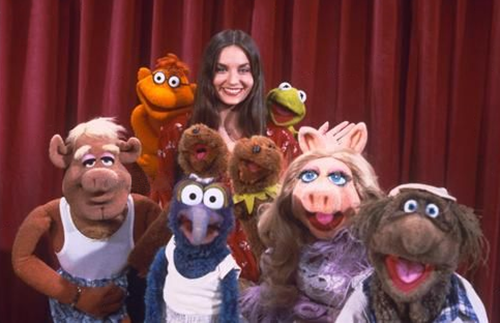 Crystal Gayle is an American country music singer. Best known for her 1977 country-pop crossover hit song, "Don't It Make My Brown Eyes Blue", she had 20 number-one country hits during the 1970s
Born: January 9, 1951  Paintsville, KY
Patrick James "Pat" Riley
As a student at the University of Kentucky, Riley participated in both basketball and football.
Through it all, Riley remembers what he learned at Kentucky.
"Discipline," he said. "Organization. Being a competitor. That's what it was all about.. "That's what Adolph and Harry Lancaster and Joe Hall, all of those men when I was there, taught me, that there was another level of competition."
~"Pat" Riley
(March 20, 1945 -)
UK Graduate 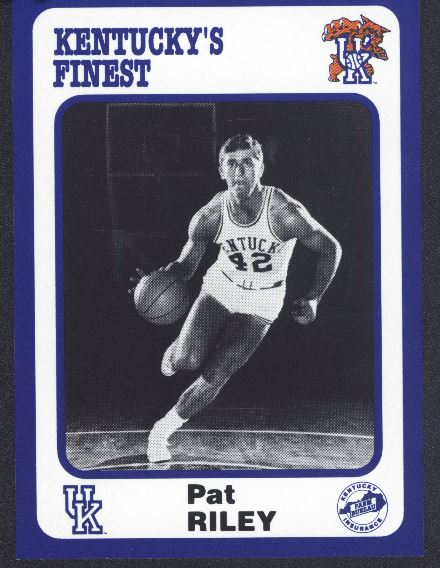 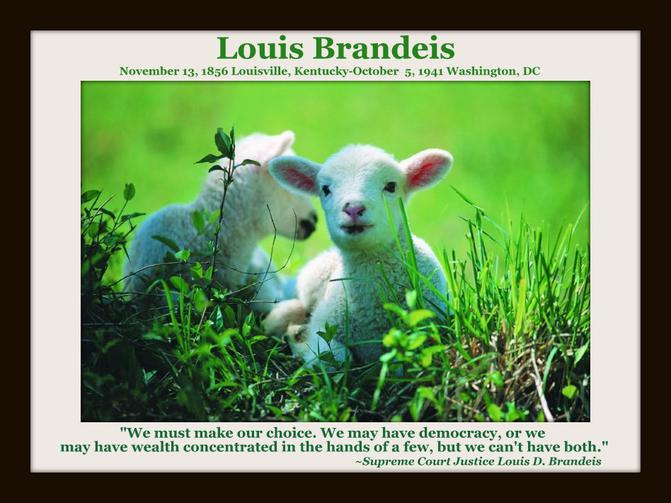 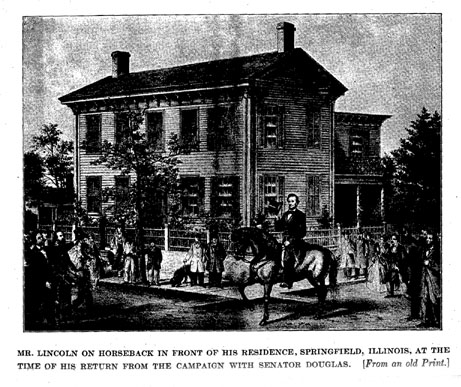 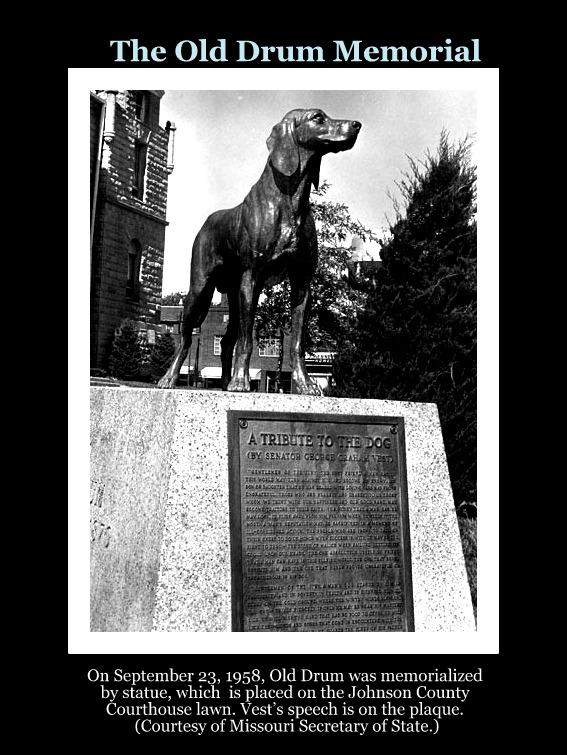 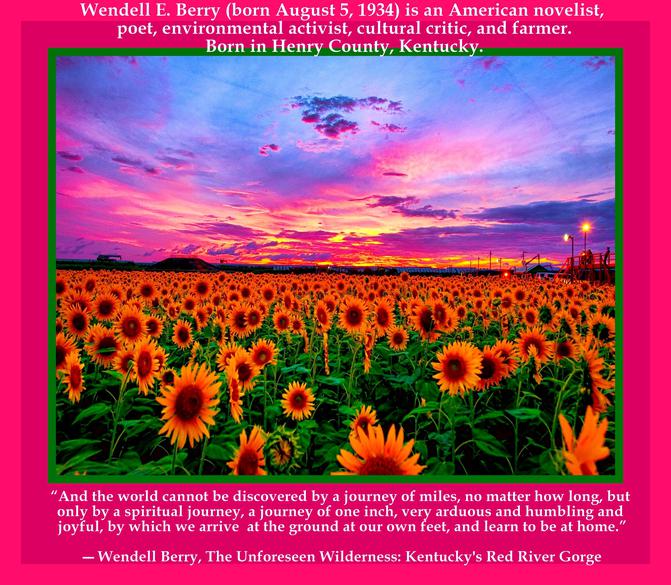 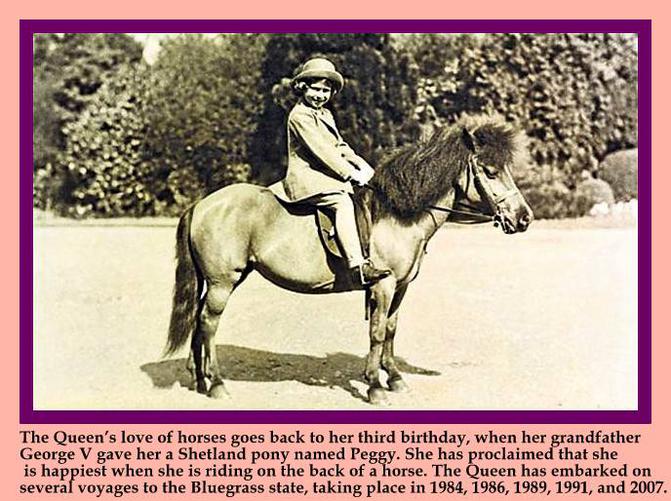 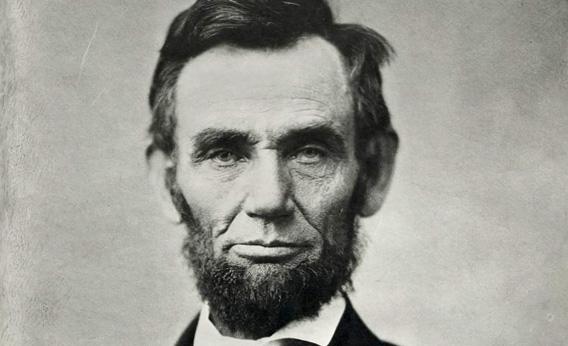 "Dogs' lives are too short. Their only fault, really."
– Agnes Sligh Turnbull
Kentucky
Kentucky-southeastern state bounded by the Ohio River in the north and the Appalachian Mountains in the east, with Frankfort the state capital.
The state's largest city, Louisville, is home to the Kentucky Derby, the renowned horse race held at Churchill Downs on the first Saturday in May. The race is preceded by a 2-week festival and celebrated in the Kentucky Derby Museum year-round.
Capital: Frankfort Nickname: Bluegrass State
State bird: Northern cardinal      Population: 4.454 million (2017) 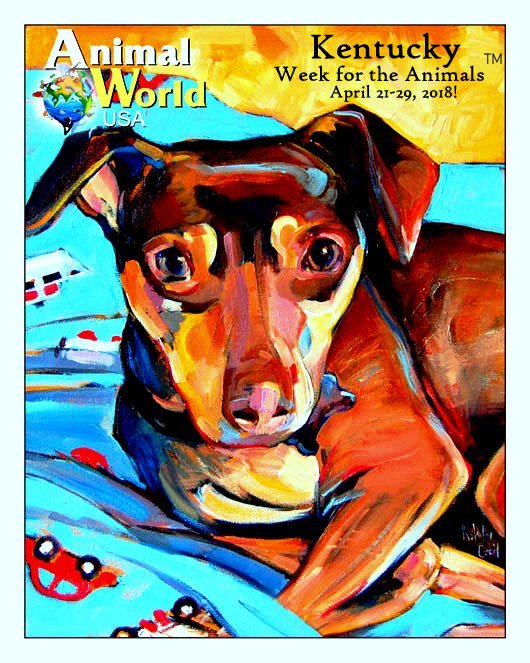 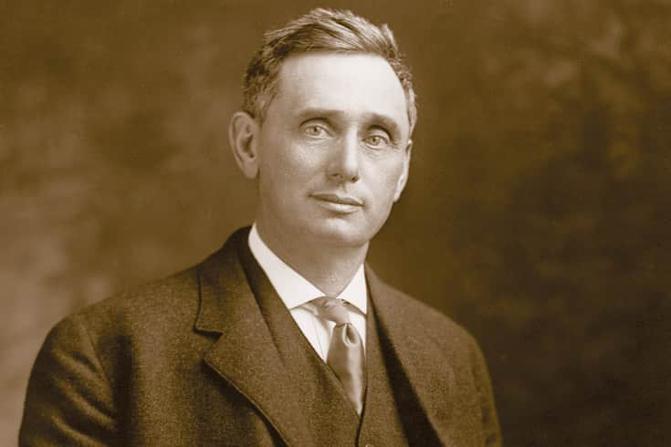 "We can have democracy in this country, or we can have great wealth concentrated in the hands of a few, but we can't have both."
~Judge Louis Brandeis, associate justice on the SCOTUS from 1916 - 1939. He was born in Louisville, Kentucky,
November 13, 1856, Louisville, KY
Died: October 5, 1941, Washington, D.C. 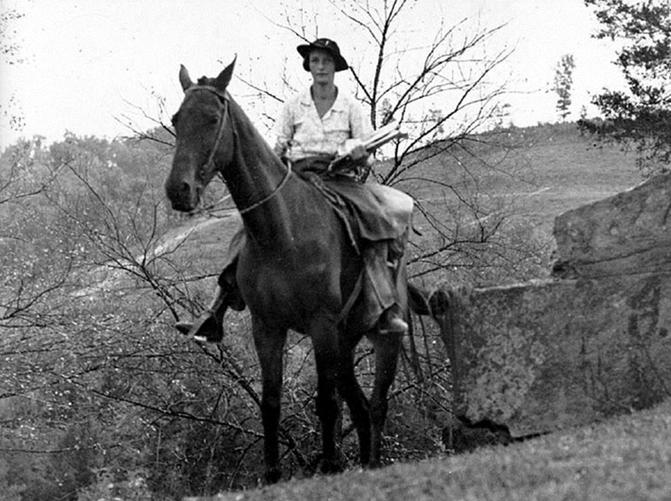